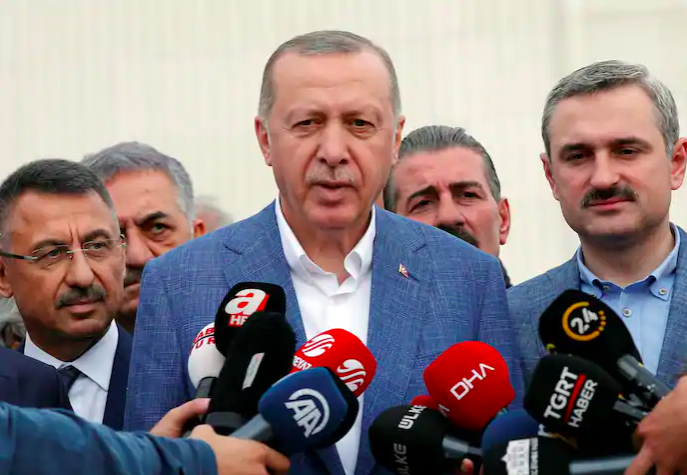 Ece Temelkuran is a Turkish journalist and writer. She is the author, most recently, of “How to Lose a Country: The 7 Steps from Democracy to Dictatorship.”

How well I remember Americans saying this three years ago, when Donald Trump rode down the Trump Tower escalator and landed in the midst of U.S. history with a resounding thud. I tried to explain to my American friends that what had happened to us in Turkey was just as possible in their own country. Conventional political tools, I told them, wouldn’t be enough to stop this new type of political insanity.

So here we are. Now even highly respected observers are considering a possibility they had once dismissed: “What if Trump doesn’t leave the White House even if he loses the election?” Well, maybe now it’s time to realize that we’re living in the age of the impossible and that we’re all in this together.

In the local elections in Turkey in March, the opposition won in several big cities despite President Recep Tayyip Erdogan’s infamously oppressive regime. (To have an idea what Turkey has been through, multiply Trump’s political skills by at least 100 and then imagine having him in power for almost 17 years. Picture The Post being owned by the family of Trump’s son-in-law. Oh, sorry, I forgot — it’s impossible.)

These painful years started with a movement of real people, creating automatic polarization and excluding anyone who didn’t support the movement by labeling them the corrupt elite. As the political debate grew increasingly confused, Erdogan and his circle became respected political actors increasingly more effective in using their political power.

What came next was a massive operation to disrupt rationality and distort language. It took the people of Turkey some time to realize that it is impossible to speak with populist spin doctors — not because they have brilliant debating skills but because they use a certain schizophrenic logic that paralyzes human reason. While this was going on, we perfected our political humor skills to calm our anxieties by making fun of the leader, just as the Americans have been doing for the past two and a half years.

Meanwhile the anger and fear generated by the leader’s absurd statements invaded not only the political sphere but also our most intimate relations. That’s when the most maddening part began: The minions of the leader started to multiply and haunt us in our daily lives. Imagine little Trumps proliferating in your workplace, saying things such as, “I don’t believe in climate change,” or “The world is flat” — and then finding yourself trying to explain why science matters without being condescending toward real people.

In the course of those 17 years, all the old political and judicial mechanisms were steadily taken apart by a ruthless government and party machine, leaving the people of Turkey to struggle to keep what is left of their democracy. The entire nation began studying our extremely complicated election law. Today you can ask any opposition member in Turkey and even the least educated will be able to recite the election laws by heart. Losing democracy has reminded us all how much blood, sweat and tears are needed to rebuild it. Now we know that no abstract institution, no legal investigation and certainly no call for shame can bring down right-wing populism once it seizes power.

It should be clear by now that something that was considered impossible in the United States or Turkey 17 years ago is happening now, and it is happening in the exact same way. It’s time to acknowledge that this is a global political and moral phenomenon that should also be dealt with on a global basis. If Steve Bannon is smart enough to organize right-wing populist leaders in Europe, and if these leaders are in touch, then the people of the world should be talking to each other, too, creating a global conversation and a network of solidarity. There’s no time for national arrogance — of the kind that has caused three years of Brexit insanity in Britain, or that prompted students in the Netherlands to report their teachers to a populist-party hotline for their leftist views.

Nor do we have the luxury of feeling appalled, of being shocked, of becoming paralyzed with anger. We have to see through the noisy insanity and figure out how this political malady works — with patterns strikingly similar in each country regardless of the maturity of democracy, the strength of state institutions or the stamina of conventional political parties. This is the biggest global crisis of representative democracy in recent memory, and right-wing populism will exploit the current vacuum until the power opposing it becomes strong enough to resist.

So let’s get to work! We’ve got to come together and start joining forces before it’s too late.