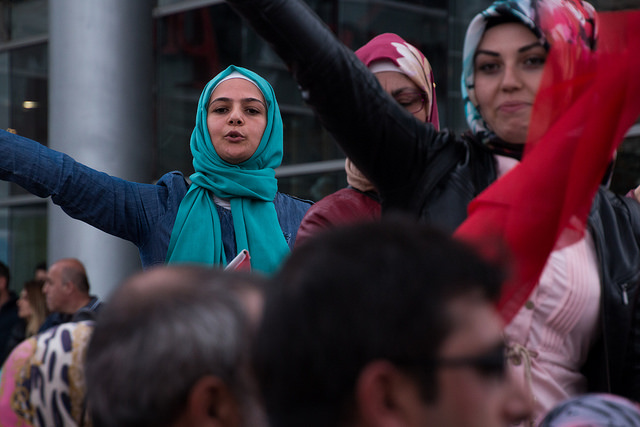 The women and the ladies

‘When the men get sick they start to seek a cure for women.’ This sentence keeps spinning in my head, because the world is going through some interesting times. This is not only happening in ‘crazy’ countries like Turkey or Pakistan. This time, the very heart of Europe is experiencing the same insanity. Rising populism and misogyny are taking over – not only in the political sphere, but also in our very daily lives. The unimaginable happens in the US: they elect their first orange president who wants to ‘grab some pussies’.

There are many names for these new, interesting times. Some say that this is the last crisis of Capitalism; some talk about the crisis of representative democracy, and some say that fascism is back with a new, more colourful outfit. I do think that all of these explanations have their ground. However, I also think that we are going through a crisis of masculinity. As women are becoming stronger and more present in public space, men are feeling useless, which urges them to, ‘Put women back in their place’. When Trump refused a handshake with Angela Merkel and made her sit with Ivanka Trump at the diplomatic meeting table, it was not an impulsive gesture. He was saying, ‘Girls sit with girls, not with the big boys’. I smiled wryly: it reminded me of what we have been through in Turkey for the last fifteen years. It has been a long and excruciating story which more or less started with making the girls sit with the girls.

International media outlets are filled with news from Turkey. Actually, they are full of pictures of President Erdogan’s face. Any piece of news related to Turkey is accompanied with his face. By now, it begins to look as if there is not a single person living in Turkey other than Erdogan himself.

The media are openly and sometimes even enthusiastically branding Turkey a dictatorship under Erdogan. This was not the case fifteen years ago, when Erdogan’s party came to power. Back then, the international media was dancing around him as a representative of the ‘real people’ and a saviour of ‘real democracy’ – just like all those other populist leaders in Europe today. Although, those days back then, fifteen years ago, were also the days when Erdogan’s party started putting women in their place.

First they began with erasing the word ‘woman’. Like any good old conservative they replaced the word ‘woman’ with ‘lady’. There were the ‘ladies’; and then there were the ‘women’. The word woman slowly began to connote something relatively obscene, sex-related – dirty. I remember one day my mother told me that, when riding on the bus, the ‘lady’ with the headscarf had been offered a place by a man, whereas she, who wore no headscarf, had not. It is no wonder that women, especially secular and progressive women, even in the early days, were far more alert than men were about the nature of this new government. In their daily lives, they were already observing tiny little changes that prefigured what was to come. The most popular metaphor at the centre of the rising concerns was ‘boiling the frog slowly’. By the time many women – and then men – finally realized that this was not warm spa water, but water which would actually boil us, and that the coming regime was threatening their secular lives, it was already too late.

The ones who resisted the regime from the very beginning were secular lower- and middle-class women living in big cities; the ones who weren’t offered a seat at the bus, if you will. Their concern was met with enflaming criticism, mostly centered on the theme of being ‘disrespectful’ of other identities, such as the ‘Muslim woman’ identity. Of course, the mainstream media did not miss this chance of exhibiting and sometimes celebrating tensions between women.

During the first term of Erdogan, mainstream channels were full of debate programmes that operated on the crude dichotomy of the ‘lady with headscarf’ vs the ‘open’ woman. As one might easily assume, the word ‘open’ has a lot of connotations – such as ‘open to sexual suggestions’. Being one of those ‘open women’, I took part in one of the most popular programmes. I still recall the amused face of the male anchor watching this political ‘catfight’, even though I had laid bare the stupidity of pitting women against each other like this. Once you accept to play on their stage – or sit at the boys table – it is impossible to escape primitive male profiling.

As women, we resisted this crude dichotomy by making joint statements with women who would identify themselves as Muslim, making it very clear that with or without a headscarf, we believe in multi-culturalism, democracy, human rights and equality. But these almost naïve statements were lost in the flood of history, which was flowing towards an authoritarian, Islamist, one-man show. Those in the middle are easily neglected and marginalized once political and societal polarization becomes ascendant.

Erdogan, along with his AKP party, is not the first political actor in modern history to have put women in their political shop window. Political movements throughout history have exhibited women to the public eye. Women have always been considered to be mannequins for political regimes.

Like Barbie dolls they are dressed this way or that, according to the regime’s likings. Once again, starting from the top, the first lady and Erdogan’s daughters did not force women to wear headscarves, but they always encouraged it. For many years, until it became too dangerous, the change in the clothing of the wives of AKP politicians was a running joke in the newspapers. As soon as the husband became a prominent figure in the governing party, the wife acquired the proper ‘lady look’, which obviously included an ostentatious headscarf. The way to climb the political ladder was clear; you had to look like them. The attitude caught on quickly, and soon all the women knew how to dress in order to be passed off as suitable mannequins of the new Turkey.

One might think that this backward change in Turkish society happened by force. There was threatening force coming from the top for sure, but it was not all about that. Many women unfortunately consented to this new way for the sake of a more prosperous life, and a more powerful position in this new society. However they could not, or just did not, consider that this change that they consented to was creating a very dangerous development for women who did not dance to the tune of political power.

As I wrote in Euphorie und Wehmut, one young woman, Didem Yaylalı, paid the price of this change with her life. She was 26 years old and a successful intern judge. However she was an ‘open woman’, was living a normal, secular life, which means drinking one or two beers at the weekends, and being naïve enough to put photos on her Facebook page. When she was interviewed for her appointment to a judgeship by The Higher Commission of Judges and Prosecutors – supposedly an independent commission but which in fact leant towards the AKP – she was told that she could not become a judge because of her ‘low morals’; she was not a ‘proper lady’. She committed suicide.

We don’t know how many women like Didem Yaylalı there are in Turkey these days; or whether they are dead or so-called alive. But we certainly know that this is not their country anymore. It is not a place they where they pass as first-class citizens, not as ‘ladies’.

Now and then I reflect on this question; do I feel at home in Turkey? Women like me pause when asked that question. To say no is to admit defeat. But it gets harder and harder to say yes. It is now far more than a matter of whether you wear a headscarf or not. It is now the question of whether you are obedient to party rule or not. Those who wear headscarves would not feel at home either, unless they submit themselves to this new life; the new order of Erdogan.

From child marriages to violence against women, Turkey’s credentials as a secular country have been on the decline over the last 15 years. My beloved country is very close to falling into the category of one of those crazy countries in which anything can happen and where nobody takes them seriously anymore.

In its final test for destiny – the referendum for Erdogan’s presidential regime – history should record that it was women who resisted most vigorously. The period running up to the referendum was a time when Turkish women, be it with headscarves or without, were the ones who said no, being acutely aware of the fact that they are fighting for their lives, and the lives of their daughters. I am fully aware that history hardly mentions women – even when they triumph. Therefore we, as women, should record in our own memories that Turkish and Kurdish women fought. They really did. Like Iranian and Afghani women did once.

Türkan Saylan, a prominent doctor and a founder of an NGO for girls’ education was a strong critic of Erdogan in her last years, while simultaneously battling cancer. Just before her death, her house was searched, due to claims of terrorism put against her. Gültan Kışanak is a Kurdish politician who survived the Auschwitz of Kurds in Diyarbakır Prison in 1980s, and went on to become the mayor of Diyarbakır – until she was imprisoned by the AKP regime. All those headscarf-wearing women, who were once public figures but criticised Erdogan are now jobless and excommunicated. Only those who submitted to be the Barbies of the political party survived, be it with or without a headscarf.

If I was to draw a lesson from across all these years, I would say: never ever forget that that you are a woman, and all the conservative, male dominated political movements are your natural enemies. But I guess it is too late now, isn’t it?

I cannot help but think that one day, when a proper history book is written, the author of that big book will finish their volumes with a single sentence, ‘Little men can generate enormous amounts of evil.’ This, I guess, can be the sentence that summarizes the story of my beloved country as well.