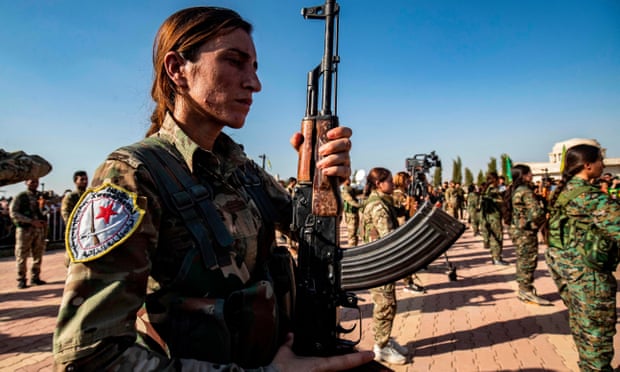 They have fought Isis with unparalleled bravery. But their fate lies in a power struggle between Putin, Trump and Erdoğan

In August 2014 Marie Claire published an unusual photo shoot. The women in the stylised images were not in fancy haute couture, but instead wore khaki jumpsuits and held machine guns. These were the female fighters of the YPG – the main Kurdish group of the Syrian Democratic Forces – in Rojava, a de facto autonomous region in northern Syria.

These women were praised for their bravery in fighting against the most unfathomable evil of our times, Isis. The world championed them as an antidote to the death cult originating from the Middle East, which spread its ideas to Europe and the US. At the same time, the women remained quite invisible to Turkish audiences, because of their connection to the PKK (Kurdistan Workers’ party) which has been designated a terrorist group by Turkey, the US and the EU.

Last week when the US president decided to tacitly back Recep Tayyip Erdoğan, the Turkish president, in his military operation in northern Syria, there was much talk of the plight of the Kurds – the word “betrayal” circulated in the higher echelons of Washington political circles, mostly as a domestic political tool against the president. But many around the world genuinely felt the burden of what had happened. This time the death toll from the ongoing war somewhere in the Middle Eastern dust with ever changing names and extremely complex details had come with recognisable female faces – those of the beautiful, young YPG fighters.

The international reaction against the Turkish incursion into Syria was a rare instance of unhesitant moral outcry since the outbreak of war in 2011. It wasn’t just because of the Kurdish fighters, but also because the western countries embroiled in the conflict were aware of their own moral responsibility for having opened up a Syrian Pandora’s box to Donald Trump’s mesmerising vulgarity and Erdoğan’s madman politics.

Every actor in the conflict may have had their own expectations for an exit strategy from this mess, but the general idea seemed to be to make it up as you go along – or, to put it in a more Middle Eastern fashion: “The caravan gets in line once it hits the road.” The betrayal of the Kurds didn’t simply come from Trump’s impulsive actions, leaving a US ally alone in the region, but rather because there was an international consensus of disregard.

As footage of military action in northern Syria began appearing last week, pro-Kurdish politicians in Turkey were first to respond. Since the beginning of war several years ago, this group have been split between responding to Erdoğan’s massive oppression of dissent in national politics, and the developments beyond their borders. But Turkey’s nationalist war-on-terror narrative has invaded the media, and as it became clear that these are extremely dangerous times in Turkey, even the strongest opposition voices were scared into silence, out of fear of finding themselves in prison for a tweet. Yet whether fear is the only reason for this silence is another matter.

For many years, there has been a cold war between Kurdish political activists and the Turkish left – despite being natural allies in the fight against human rights violations and towards democratisation. This conflict crystalised in 2003, just before the Iraq war. While the Turkish left was organising anti-war demonstrations, Kurdish politicians seemed reticent: some of them were beguiled by the potential for a Kurdish state in Northern Iraq once the US invasion began – a long-term aspiration for some Kurds.

The complicated battle flared up again in 2013 when the Turkish government began peace talks with the Kurds and Abdullah Öcalan, the imprisoned leader of the PKK. The conventional left criticised Kurdish politicians for falling for Erdoğan’s false promises – but Kurds did not want to miss a historic chance for a peaceful settlement.

The irreparable damage on all sides came with the Syrian war. While the US-backed YPG, and Kurdish armed forces in general, earned international recognition for their brave fight against Isis, the broader Kurdish question appeared dramatically different to the Turkish one. Until then, it was a more narrow question of democratisation and human rights in Turkey – but with Syria it became a Middle Eastern conflict. Ordinary, progressive Turkish people were barely able to follow the storyline of complex international power struggles. The Kurds were now playing the big game with big players on the world stage, they thought, and the Turkish left’s plate was full taking on Erdoğan’s repressive regime anyway.

The left believed that the Kurds betrayed the democracy struggle in Turkey – while the Kurds believed that the left abandoned them in their battle for existence. Meanwhile, the only political figure who could have helped mend the broken ties between these sides, Selahattin Demirtaş, co-leader of the HDP – the pro-Kurdish People’s Democratic party – has been in prison since 2016.

This all goes to explain the silence in Turkey among the Kurds’ natural allies and supporters.

The only character who seems to have a plan in this sorry story is Russian president Vladimir Putin, who met with Erdoğan on Tuesday. In a new world where global decisions are made not by transparent democratic institutions but by a few men behind closed doors, they will decide the destiny of the Kurdish people.

I am stuck with the image of a Kurdish female fighter in Rojava today who is facing the disgusting banality of history being made in mafioso fashion. Some Americans will use her betrayal by Trump as a means to pursue their desire to topple the president. For Putin and Assad, she is a precious bargaining chip. Erdoğan has already used her as a tool for the most effective consolidation of power in domestic politics for a decade.

As the daughter of a people who for centuries have been swept back and forth through a viciously contested location, continually facing death in the hope of being recognised, this YPG fighter will wonder if her fight against Isis will really be remembered at all.