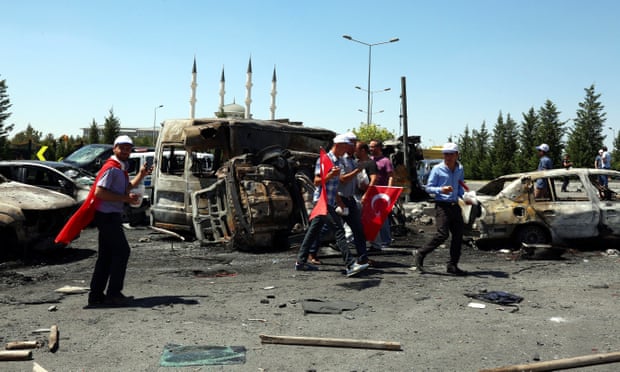 Yet again Turkey’s children have awoken to darkness at dawn

I remember the Turkish coup of 1980. Now it is my nephews’ turn to see adults terrified, fearing for their lives and their country’s future

Until I was eight years old, I had never heard the word “dawn”. Then, early one morning, I woke up to the radio playing loudly in the living room, and found my mother and father chain-smoking as they listened to the declaration of a coup. Their faces darkened as the day broke. It was 12 September 1980, the first time I saw the dawn.

On 16 July, early in the morning, Turkish children were woken by the television to find their similarly terrified parents.

M and C, eight and six years old, are my half-American nephews, my brother’s sons. They were supposed to go home to the US on that day after their fun vacation with Babaanne– my mother, their grandmother.

Although they mostly speak English, they keep this Turkish word as a memory from their father’s land. But today they have a new, darker memory. Because instead of heading to the airport that morning, as day broke, they watched their babaanne crying in front of the TV. My mother told me M asked the same question I had, 36 years ago: “Did something bad happen to Turkey?” Now he is part of the vicious cycle of the country’s history, of destroyed democracy and inadequate attempts to repair it.

In my beloved, crazy country, political polarisation, social inequality and a lost sense of justice led to turmoil in 1960, 1980 and today. But this time the madness was unprecedented, even for Turkey, where the absurd has long been ordinary.

The night started with a few dozen soldiers barricading the Bosphorus bridge, shouting: “Go home, this is not a military exercise!” As a result of the 1980 coup, Turkish people know what a real coup looks like; the absurdity of this one meant people congregated on social media, sharing information and even jokes.

For the last few years, sarcasm has become the only way to survive, emotionally, in Turkey. Some jokes hinted at a conspiracy. Many thought this was a staged act to legitimise the presidential – rather than parliamentary – system that President Erdoğan has long been asking for, a change that would give him considerably more power.

These jokes disappeared as soon as the fighter jets started flying over Ankara and Istanbul. Since this is a postmodern media age, we learned the war discourse in real time, discovering that what we thought was a bomb was often just a “sonic boom”, the blast-like noise caused by an aircraft or other object travelling faster than the speed of sound. Throughout the night, on social media, people tried to differentiate between this and the real bombs that hit the parliament and intelligence service headquarters.

In Turkey, we expect coups to start with the army taking custody of politicians and cutting news sources. Instead, on the night of 15 July, government representatives, including President Recep Tayyip Erdoğan, appeared on TV channels, calling for the public to support democracy against the army.

Erdoğan communicated through FaceTime, his message shown on CNN Turk, as he called everyone out to the city centres. Not many of us thought government supporters would take to the streets because, since the founding of the modern republic in 1923, under Kemal Atatürk, the army has traditionally been the most respected institution in Turkey, if not the most feared. But apparently much has changed in Turkey since the 1980s, and the president’s call resonated with thousands.

The young soldiers who were staging the coup, commanded by a few generals, were absolutely terrified when met by furious supporters of the president. After the 1980 coup, the CIA’s former Turkey chief Paul Henze remarked to the then US president, Jimmy Carter: “Our boys did it!”

But watching the footage of the current coup unfold, the comment on social media was: “This time ‘their boys are not doing it’.” This coup was too sloppy to be the CIA’s work and seemed even too blundering for the Turkish army as we know it.

Some young soldiers were crying when faced with people shouting “Allahu Akbar!” (God is great). The crowd resisting the army was unprecedented. In 1980 it was leftists who resisted and were imprisoned and tortured in their thousands, while Islamists built the new conservative and neoliberal Turkey. This time the resistance was those who have followed Erdoğan since his imprisonment for four months in 1999. This was due to a conviction for religious incitement, after he recited a nationalist poem in a public speech: “The minarets are our bayonets The domes our helmets The mosques our barracks And the faithful our soldiers.”

During the night, sonic booms, constant gunshots and sirens were accompanied by the never-ending sela from minarets, a special prayer recited after death. Bitter jokes circulated, “This is the sela for the Turkish Republic as we know it.”

Erdoğan’s supporters, his faithful, were marching towards city centres to kick the tanks, beat the young soldiers and allegedly cut a soldier’s throat. By 3am many thought we were to wake up either to a military regime or an Islamist one. Most of us were convinced, in either case, that critics of the authorities would be victimised.

As pictures and videos came through of arrested soldiers lying naked in the streets – as leftists did after the coup in 1980 – the government supporting news channels were presenting us with the perspective they deemed appropriate: “Our people saved our democracy.”

It’s true that our people stopped the soldiers. But it’s not clear if this was out of love for democracy or because, for some, a devotion to army has been replaced with a religious commitment to Erdoğan.

To be honest, it is likely to be years before we really know what happened. It was more than two decades before we heard the sound recording of Paul Henze that proved the CIA’s interference in the 1980 coup.

You never know what children will choose to forget when they are grownups. I learned this while studying my own memory of 1980 to write the novel Cycle: Time of Mute Swans. Two years ago I dedicated it to my nephews with the words: “I wonder what you will forget.”

The picture of 1980 to me is my terrified parents talking to their friends during long nights, with a cloud of stagnant smoke hanging over them. I remember the feeling of insecurity, and my urge to protect them. During the long night of Turkish democracy, just past, M and C were running up to each one of us to see our faces, to try to read our expressions. Just as I did when I was eight, they have learned the feeling of helplessness without being able to name it.

M and C left Turkey to live in the US when they were aged four and two, respectively, so they don’t know much about Turkey. The following morning they were talking to each other when I heard M asking C about the minarets, “What are those towers?” C answered: “It is where they sing in the night.”

Maybe one day, reading this article, they will remember what they don’t recall forgetting. Such a cycle of dark dawns it is.