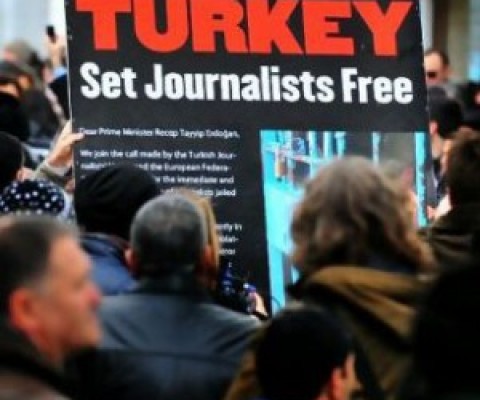 23 November: The women around me are more alert to the Turkey’s situation than the men are. The comfortable male universe is full of denial encased in a constantly refreshed argument: “It cannot go on like this; this is not sustainable.” And my reiterated response to this denial: “What will stop it?” There are neither domestic nor international limits to the resident’s ambitions. While the world is rightly horrified by the jailing of writers and journalists, the objections fall on the president’s deaf ears. Turkey’s opposition is spent, its strength consumed by endless court appearances. A handful of lawyers are trying to catch their breath while running between courtrooms to represent or witness the trials of Turks caught up in the witch hunt that swept the nation in the wake of the failed 15 July coup.

24 November: Just another day in a land of insanity. The EU Parliament announced its decision to freeze Turkey’s accession talks due to the government’s suppression. Three soldiers were killed by a Syrian jet, interestingly on the anniversary of Turkish jets bringing down a Russian plane last year. There was no news due to the traditional news ban so we don’t know if there will be a war tomorrow. And Ahmet Türk, the most prominent and dovish figure of Kurdish politics was jailed. He is 74 years old. Turkish lira dipped to a new record.

On the streets, the humour is in accordance with the insanity: “Make Turkey so-so again!”

25 November: Castro dies. As with everything else, this also becomes a subject of dispute between opposition and government supporters. Nothing can escape being the object of polarisation in the country. After some people say goodbye to Castro on social media, government supporters revolt: “How can you support a dictator?” If the partisanship can make you defend child rapists, which happened recently due to a child abuse case in a government-affiliated charity foundation, it can make you do anything.

26 November: President Erdogan is threatening the European Union. “We will open the borders for refugees and you will see,” he says. His reckless statements are on one side, Europe’s ethical failure about refugees on the other. Erdogan now seems to be the bull abducting Europa. As the fundamentals of Western civilisation and democratic values come to pieces, the bulls around the globe find their way to the top.

One perfect Balkan noir scene at a Zagreb cafe. At each table there is a grumpy old man reading a newspaper while the young waiter plays high volume Riders on the Storm at high volume. He asks where I am from. “Oh Istanbul! Never been there,” he says. I smile. “Go before it is too late.” He smiles back with sarcasm: “I am from Bosnia. Everywhere is too late.” Maybe true. Maybe it’s a bulls’ world now.

27 November: I was avoiding this piece of news for two days. I have finally read it. A nine-year-old girl died of a heart attack because she couldn’t take the pressure of facing her rapist during her hearing in court. One friend asked: “Why have the men all of sudden became so evil in this country?” My answer is “Because they can!” When the rule of law is damaged and basic human values are shaken, they can. And we, stunned like a beaten dog, just murmur: “It cannot go on like this.” But it does.

28 November: Came to Copenhagen for NewXChange, the meeting point for the world of journalism. I will be speaking in a panel with the title Are we out of Touch? Well, Trump is tweeting: “CNN is so embarrassed by their total (100%) support of Hillary Clinton, and yet her loss in a landslide, they won’t know what to do.” He knows that attacking established media will get him more points than anyone can imagine. While talking about Operation Euphrates Shield president Erdogan said: “We entered Syria for nothing else but to end cruel reign of Al-Assad” It is as if Turkey declared war on Syria. People are asking, “How can he say that?” Well, shall I repeat it once more? Because he can.