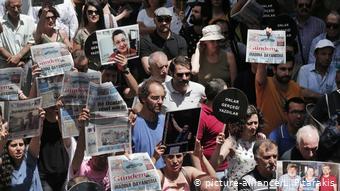 Turkey is imprisoning intellectuals, but regime-critical author Ece Temelkuran has chosen to stay in Istanbul. She tells DW why what’s happening in Turkey is relevant to all of us.

Turkish journalist and author Ece Temelkuran, born in Izmir in 1973, works as a columnist for a number of daily newspapers and online publications in Istanbul. In 2011, she lost her job at the Turkish news channel “Haberturk,” where she had worked as a presenter, after penning a number of articles that were critical of the way the Turkish government dealt with the killing of Kurdish civilians in Uludere.

Temelkuran has published 12 books, examining issues such as Turkey’s difficult relationship with Armenia and the Kurds. Her book, “Deep Mountain: Across the Turkish-Armenian Divide” has been translated into English.

DW: You’ve been dealing with developments in Turkey for more than 20 years. The arrests made in the wake of the failed military coup on July 15 have been justified by the government as its way of “protecting democracy” or “fighting terrorism.” How do you think the situation will develop from here?

Ece Temelkuran: We’re past the point of being able to judge the situation with our hopes and fear. Neither is our hope strong enough to put up any resistance nor can our fears lead us down the right path. Mistakes were made from the beginning. The current government managed to convince the people that they were a “social movement.” Turkey fell for this narrative of the true nation building a true democracy by showing resistance against the repressive elites.

That was the day on which the mobilized and organized stupidity and ignorance managed to grab hold of power. The rest happened automatically. Everything that those with power did from then on has been justified with this narrative and made holy.

Furthermore, all social institutions in Turkey, which never were particularly strong to begin with, have been severely curtailed, and no one has reacted sufficiently. What’s more important, however, is the fact that the country’s value system has been turned completely upside down. This is a global problem that needs to be tackled collectively. The concepts of democracy, civil society, and identity politics have to be closely examined. Everyone will see that this thing that we are seeing in Turkey isn’t just a Turkish issue, but a greater crisis that has to do with neo-liberalism.

The voice of the opposition has been increasingly silenced. You’ve said that you’re not afraid. What drives you in times like these to continue writing and criticizing?

I think that the fear of no longer having a home is stronger than all other fears.

You have said that Turkey wants to create “a new kind of person.” What do you mean with that?

This sort of person knows no shame and ignores all norms that humanity has developed to this day. There are people who are comparing what’s going on in Turkey with Nazi Germany. But they’re not comparable. This change runs much deeper. It’s as if all fundamental values have been switched around – good and bad, right and wrong.

Imagine that a 14-year-old child is shot and killed by a police office and the person who holds all the power in his hands lets this child and his family be booed. That cannot only be explained by politics. To do something like that, you have to have completely lost your conscience.

You still live in Istanbul. Germany has offered to let Turkish academics apply for asylum. Have you thought of leaving Turkey?

I was very sad when I heard that. It’s painful to see that your own country has become a place which is legitimate to want to leave. In my 20 years as a journalist, I have never seen a happy refugee. It’s impossible for me to imagine leaving Turkey. As long as my books are published, I travel to other countries, catch my breath there and return to Turkey.

I know that the “New Turkey” project doesn’t include people like me. But we “bridge people” – those of us who live between Asia and Europe – know from our genetic heritage that nothing is forever.

Germany is the guest country this year at the Istanbul Book Fair. What do you expect from Germany when it comes to Turkey?

I don’t expect anything from another country. But you have to understand that the developments Turkey is going through will soon come to Europe. It’s better for all of us if we recognize that what’s happening in Turkey is not just a Turkish issue, but an issue that impacts us all.